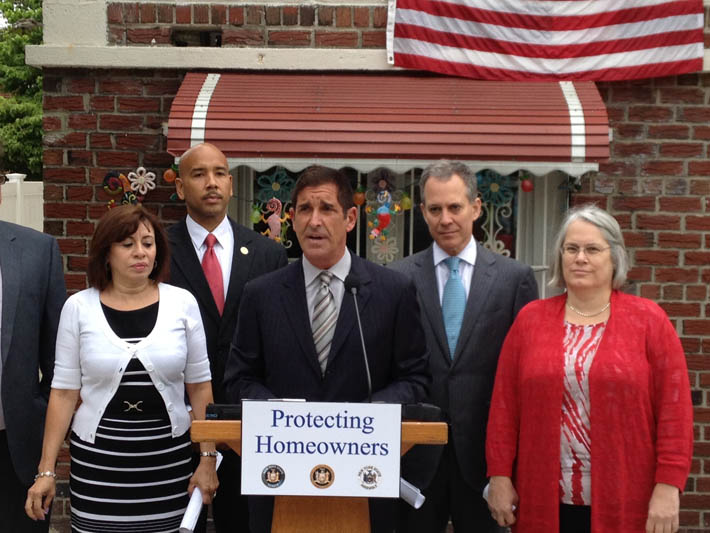 BRONX, NY – Alongside Bronx foreclosure victim Daisy Vargas—and the four generations of family members who call her Castle Hill residence home—top elected leaders highlighted recently passed ​legislation aimed at preserving important homeowner rights during the foreclosure process. Since the financial crisis, banks have exploited judicial loopholes to deny foreclosure victims their right to the type of court-mediated settlement conference that can help homeowners keep their homes. The legislation (S.4530A/A.5582), known as the “Certificate of Merit” bill, would close that loophole, and protect every homeowner’s right to an in-person, court supervised settlement conference within 90 days of entering foreclosure.

By denying homeowners their right to a settlement conference, banks have forced roughly 14,000 New York homeowners into the New York court system’s “shadow docket.” On the shadow docket, banks can keep foreclosure actions open without ever negotiating with the homeowner—even if the homeowner is willing to pay every dollar owed.  During this time, interest charges and late fees escalate, enabling banks to demand larger sums from homeowners once the foreclosure action finally makes it to the courtroom.

Senate Majority Coalition Leader Jeff Klein (D-Bronx/Westchester) said, “Deliberately irresponsible behavior by big banks has forced roughly 7,000 New York City homeowners into the type of legal limbo that our laws were designed to prevent. The Certificate of Merit bill will finally change all of that, by guaranteeing every homeowner the right to a mortgage settlement conference as soon as a bank files a complaint. But the real hero today is Ms. Vargas, who is doing everything she can to prevent other homeowners from being victimized. I want to thank all of my colleagues, particularly Attorney General Schneiderman and Assemblywoman Weinstein, for all of their work in getting this important legislation passed.”

“All across New York State, thousands of homeowners are trapped in the ‘shadow docket’ that prevents them from even getting a chance to keep their homes,” said Attorney General Eric Schneiderman. “The ‘Certificate of Merit’ addresses this problem by proposing common-sense reforms to keep homeowners out of the legal limbo and ensure their rights are honored. I am committed to ensuring that the big banks play by the rules, and that New Yorkers get a fair shake.”

Assemblywoman Helene Weinstein (D-Brooklyn) said, "For far too long, homeowners like Ms. Vargas have fallen victim to lenders who exploit loopholes and evade our state’s foreclosure filing laws. This has allowed lenders to file cases, some improperly, leaving homeowners like Ms. Vargas stranded with fees and interest adding up and little hope of ever mediating or modifying their loan. The steps outlined in the legislation introduced by Chief Judge Lippman, Attorney General Schneiderman, Senator Klein and me will save homeowners months, if not years, of unnecessary delay and stress by closing these loopholes, allowing them to regain their footing and giving them a fair chance at negotiating to keep their homes."

Without either a settlement conference or a court hearing, homeowners are denied an opportunity to keep their home. Ms. Vargas, who was put in the shadow docket’s legal limbo for 3 ½ years, told her story of being victimized by HSBC. When Ms. Vargas was finally given her day in court, Ms. Vargas surprised the judge and the bank’s representatives by offering to pay the full amount owed, even after taking into account the exorbitant interest charges and late fees imposed by the bank. As a result, Ms. Vargas and her family were able to keep their home

Daisy Vargas said, “I am here today to let Governor Cuomo know that struggling homeowners have a right to a settlement conference when in a foreclosure proceeding. Many homeowners are in legal limbo, like I was for 3 ½ years, waiting for a settlement conference that may come far too late to ever save their home. I fought with the help of Legal Services of the Bronx to keep my home. I fought because there are four generations living in this home, from my mother to my granddaughter, and I refused to give in. Governor Cuomo, the interest fees we incurred as a result of HSBC’s insistence on leaving us in limbo for 3 ½ years was close to $60,000—all of which was put at the end of my mortgage loan as a balloon payment. If both houses of the state legislature can pass legislation to prevent another homeowner from falling into the same predicament that I was forced into, then now is the time for you, Governor Cuomo, to sign this bill into law. Please do not allow any other homeowners to lose what they have struggled so hard to earn—the American Dream and a home for their families.”

Bronx Borough President Ruben Diaz Jr. said, “Over the past few years we have seen unscrupulous behavior from many banks, in their efforts to foreclose on the homes of those going through difficult times. But now with the passage of this new piece of state legislation, we can remedy at least part of this issue. Now residents here in the Bronx and across the state will have considerable protections so that they won’t unjustly lose their homes to foreclosure.”

In 2009, Senator Klein authored landmark foreclosure legislation aimed at protecting homeowners and preserving property values in communities stricken with high rates of foreclosure. Senator Klein’s legislation, which was signed into law by Governor Paterson, requires banks to maintain foreclosed properties, creates new ways for homeowners to stay in their homes after foreclosure proceedings, and guarantees every homeowner the right to a settlement conference prior to any court proceeding.

At the press conference, Attorney General Schneiderman also discussed how his office’s current lawsuit against HSBC will help protect homeowners from similar irresponsible practices by banks and lenders. An investigation of robo-signing conducted by the Office of the Attorney General with 48 State Attorneys General, the Department of Justice and the U.S. Department of Housing and Urban Development, led to the signing of the National Mortgage Settlement, a $25 billion agreement with the nation’s five largest mortgage servicers and provides for billions in mandated consumer relief including mortgage refinancing and principal reductions.

Attorney General Schneiderman has made protecting homeowners struggling to avoid foreclosure a top priority. In June 2012, he announced the Homeowner Protection Program (HOPP), a three-year, $60 million dollar initiative to fund housing counselors and legal services across New York State. The program strives to ensure that every family facing foreclosure has access to a knowledgeable and qualified professional advocate.

Justin Haines, Director of Foreclosure Prevention Unit at the Bronx Division of Legal Services NYC said, “Every day in New York, an estimated 92 homeowners enter the legal abyss of the foreclosure ‘shadow docket,’ where a foreclosure case is filed against them but they are denied a chance to work out a pre-foreclosure solution under the court’s supervision. In the Bronx alone, several thousand homeowners have lingered in this limbo for two or three years. This inexplicable delay can be fatal to the homeowner’s attempt to modify their mortgage. The legal loophole needs to be closed and banks need to be held accountable.  We thank Senator Klein, Assemblywoman Weinstein, Attorney General Schneiderman and the Office of Court Administration for their efforts to address the problem.”

“This legislation is good news for New Yorkers who are facing foreclosure and will now have a better chance to keep the homes they’ve worked hard all their lives to own,” said Beth Finkel, State Director for AARP in New York State. “By ending lenders’ delay tactics and ensuring prompt, court-supervised mediation, this bill gives homeowners a fair shake at an affordable loan modification – it’s the kind of common sense solution we need from our state government. AARP thanks Attorney General Schneiderman, Senator Klein and Assembly Member Weinstein for turning this good idea into a reality, and we call on Governor Cuomo to sign it into law.”

Meghan Faux, Acting Director of Legal Service NYC’s Brooklyn Programs said,  “This legislation is a simple but desperately needed solution that will save homes by helping homeowners more quickly access foreclosure settlement conferences.  The law will also increase transparency in the foreclosure process and prevent wrongful foreclosure filings that are clogging the courts and denying homeowners an opportunity to save their homes.  We thank Assemblywoman Weinstein, Senator Klein, the Office of Court Administration and Attorney General Schneiderman for their leadership in addressing the servicing and lending abuses that have exacerbated the foreclosure crisis and destabilized low-income communities.”