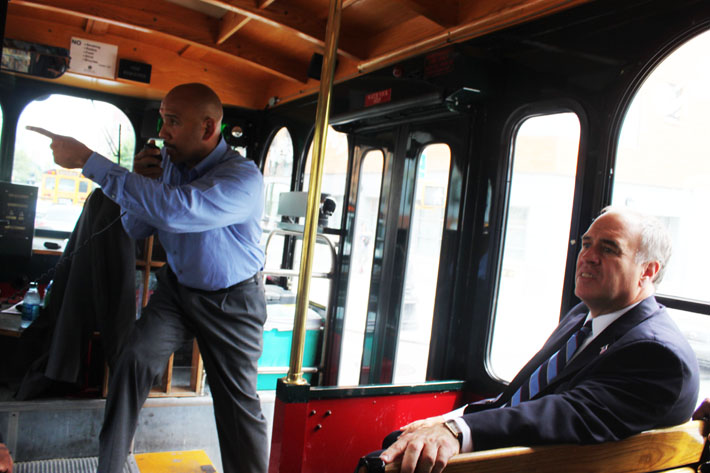 “The ‘New Bronx’ is a place of opportunity. The major development projects we see coming up in every corner of our borough are evidence of that rebirth, and we have many more projects on the way. I am proud to have shown some of the great progress of the ‘New Bronx’ to Comptroller DiNapoli today, and I look forward to working with not only the comptroller but all elected officials, business leaders, community groups, non-profits and the 1.4 million people who call this borough their home as we continue to lead the Bronx into a new age of prosperity,” said Bronx Borough President Ruben Diaz Jr.

“The Bronx has made impressive economic strides with thousands of new jobs and businesses to provide a springboard for advancement for community residents and families,” said New York State Comptroller Thomas P. DiNapoli. “There are many exciting economic development projects in the works to ensure that the Bronx continues to move in the right direction.”

During the tour, which took place in the Bronx Trolley, Borough President Diaz and Comptroller DiNapoli discussed the ongoing development of the borough and efforts to create new employment opportunities in the Bronx. The two specifically visited Co-op City’s Bay Plaza, the site of a forthcoming indoor retail mall, and the Hutchinson Metro Center, which will host the borough’s first world-class hotel. Both sites would also be serviced by the proposed East Bronx Metro North Expansion, which is discussed at length in Comptroller DiNapoli’s report.

“The Bronx has come a long way and I am thrilled that State Comptroller DiNapoli will see firsthand the ‘New Bronx’ and how our great Borough is growing and putting its people back to work. The ‘New Bronx’ is a place where we have helped to create or retain thousands of new jobs, and will create thousands more,” said Marlene Cintron, President of the Bronx Overall Economic Development Corporation.

“The future looks brighter and better now more than ever for the Bronx,” said Rep. Joe Crowley (D-Queens, the Bronx). “I am encouraged by the findings of Comptroller DiNapoli’s report and proud of the borough’s entrepreneurial spirit and resurgence as a hotbed for new businesses and economic development. I look forward to continuing to work with my colleagues in Congress to enact policies that will strengthen small businesses like the ones we have right here in the Bronx and ensure they can continue to flourish for generations to come.”

"The Bronx is officially on the rise. New businesses are popping up across the borough and existing businesses are creating more jobs. Not only that, but more families are now calling the Bronx home. Comptroller DiNapoli’s report puts into words what Bronxites experience every day. The ‘New Bronx’ is here to stay. I look forward to working with state and local leaders to support this growth and I encourage New Yorkers of all stripes to visit the Bronx, just like Comptroller DiNapoli has, so that they can witness all that the Bronx has to offer,” said New York State Senator Jeffrey D. Klein.
“The Bronx is the place to be!  We are enticing new residents, shoppers and visitors to our great borough by revamping local attractions and adding a few new developments already in progress.   These projects will stimulate the economy, help the workforce and reinforce pride in the Bronx,” said City Councilman Joel Rivera.

“I want to thank State Comptroller Thomas DiNapoli and Bronx Borough President Ruben Diaz Jr. for their tireless advocacy on behalf of the Bronx,” said Council Member Melissa Mark-Viverito.  “This borough is now on the dawn of a new day of economic empowerment.  We must continue to work and engage Bronx residents, families and small business owners to ensure that these developments continue in an equitable manner, and that they serve the best interest of the surrounding communities.”

The Bronx is undergoing an amazing renaissance that benefits all 1.4 million people who reside here. The developments of two new shopping malls along the Broadway corridor in my district are but two examples of this incredible growth. The enormous investment by the private sector in every corner of the Bronx is a strong vote of confidence they have shown in the future of our borough. I am proud of the leadership that Bronx Borough President Ruben Diaz Jr. has shown in leading these efforts. I have lived in the Bronx all of my life and I could not be more confident in the future of our borough,” said New York State Assemblyman Jeffrey Dinowitz.

"As an elected official from the Bronx, one of my principal goals is to help develop and support initiatives that aid in fostering economic development for the local economy. I am pleased to see that the Bronx is trending upward in terms of the indices that measure its fiscal health. I look forward to the borough’s continued renaissance as it thrives due to deft leadership via sound economic planning,” said Assemblyman Luis Sepulveda.

Comptroller DiNapoli’s report on the Bronx can be found at: http://www.osc.state.ny.us/osdc/rpt4-2014.pdf