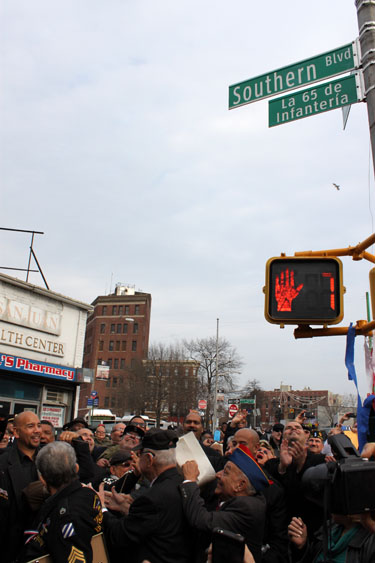 The momentous ceremony commemorates the achievements of the men in the 65th Infantry Regiment since World War I and most notably the Korean War.  The critical role and the contributions displayed by the soldiers of the 65th Infantry Regiment, the only Puerto Rican unit in the United States Military known as Borinqueneers do not go unnoticed with their participation in nine major battles during the Korean War.  In one of the missions the Borinqueneers protected the redeployment of Marines from Hung-Nam, which culminated in what became the last battalion sized bayonet charge in American military history.

While the men of the 65th Infantry were honored with two United States Presidential Unit Citations, a Meritorious Unit Commendation, two Republic of Korea Unit Citations and a total of 577 Bronze and Silver Stars along with 8 Distinguished Service Cross, none were recipients of the military’s highest award, the Congressional Medal of Honor.

As part of the 60th Anniversary in the summer of 2010, the US began a three-year remembrance of the Korean War.  Many military veterans who left service without recognition have recently received overdue honors.  Based upon the lack of recognition, Council Members Maria del Carmen Arroyo, Joel Rivera, and Fernando Cabrera jointly introduced a bill for the street co-naming which was subsequently passed by the Council and signed into law by the Mayor.

“I am proud to stand with the community to celebrate this historic event as Southern Boulevard is co-named ‘La 65 de Infanteria Boulevard.’ It is an honorable recognition that the ‘Borinquneers’ truly deserve for their brilliant record of heroism on the battlefield. Thousands of Puerto Ricans, many of which live right here in God’s country the Bronx, have served courageously as ‘Borinqueneers’ since World War I. The Bronx honors and thanks them for their sacrifices and service to our country and offers its eternal gratitude,” said Bronx Borough President Ruben Diaz Jr.

“It is for their courage, dedication and loss of life that the Borinqueneers are greatly appreciated in their service and patriotism.  This new street co-naming is in recognition of every man on the front line whose heroism and honor is part of our heritage and our history,” states Councilmember Joel Rivera.

“It gives me great pleasure to be part of an effort that draws attention to the enormous contribution the 65th Infantry has made in shaping our country’s history.  As Americans, as Puerto Ricans, we owe a debt of gratitude to the thousands who served as a Borinqueneer.  Many did not return, and those who did, were forever changed!” states Councilmember Maria Del Carmen Arroyo.

“I am pleased to be a part of this long overdue recognition of the historic contribution of the 65th Infantry Regiment.  This unit known as the Borinqueneers distinguished themselves during nine major battles during the Korean War, the unit’s contributions with the awarding of two Presidential Citations.  Today all New Yorkers offer a salute and a word of praise for a Job well done to these brave men,” states Councilmember Fernando Cabrera.

“On behalf of the surviving veterans and those who have fallen, we extend our deepest appreciation to every one of the elected officials and their unsung staff, who worked so hard to make this effort a reality.  It is an historic event, a day of pride for all American patriots to share in our bragging rights.  This street will become a New York City cultural landmark, reminding all who travel on it of the valor and ultimate sacrifices made by these Puerto Rican soldiers defending our American freedoms.  It is appropriate that the South Bronx and Southern Blvd. is designated to bear the name of a Puerto Rican Combat Regiment that served in the Korean War. Southern Blvd. is to Puerto Ricans what Mulberry Street is to Little Italy.  I hope everyone who can make it, will attend and bear witness while we honor these exceptionally valiant soldiers,” stated Anthony Mele, Chairman, 65th Infantry Honor Task Force.

It should be noted that General Douglas MacArthur said it best when he stated, “The Puerto Ricans forming the ranks of the gallant 65th Infantry give daily proofs on the battlefields of Korea of their courage, determination and resolute will to victory…They are writing a brilliant record of heroism in battle and I am indeed proud to have them under my command.  I wish that we could count on many more like them.”