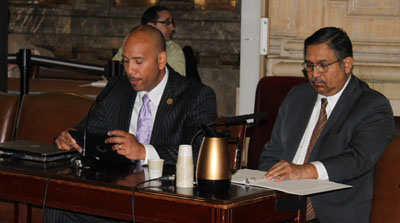 Chairwoman Mealy, thank you for offering me this opportunity to testify before your committee on the “Fair Wages for New Yorkers” Act, an important piece of legislation designed to ensure that our taxpayer dollars are spent more wisely.

The premise of the “Fair Wages for New Yorkers” Act is simple. When developers take heavily from the taxpayer wallet, they must do better by their future employees. This bill would make sure that happens, by requiring those receiving heavy taxpayer subsidies pay their employees a “living wage.”

Although it would not hurt the financial viability or profitability of these major developments, this small sum would, indeed, dramatically alter the lives of their employees. A few dollars more each week could mean the difference between food on the table, new clothes for the children, much needed medication or an on-time rent payment.

When I last testified in March, I noted that the parameters of this bill were not set in stone. We said that we were willing to listen to all reasonable concerns about this bill and adjust it accordingly. We said that we would be willing to make this bill more targeted and specific, in order to address concerns over affordable housing and small businesses.  Moreover, this bill was not intended to be a retroactive catch all, but is focused on new developments.

And we have done just that. Over the past several months my office, along with the two prime sponsors of this bill—Council Members Annabel Palma and G. Oliver Koppell—and the members of the Living Wage NYC coalition, have been working hard to amend this piece of legislation, so that some of the concerns raised at the first hearing are addressed in this new version of the bill.

We have explicitly exempted “as of right subsidies,” such as the ICAP, that the bill cannot legally tie to a “living wage” mandate. Instead, this bill will now only focus on the specific discretionary subsidies that are offered by the City of New York.

We have significantly reduced the length of the bill’s mandate, from 30 years to ten years or the life of the subsidy. We have also reduced the record keeping requirements of the original bill down to just six years, which is already required by New York State law.

We have excluded all manufacturing companies from this bill, so that any wage mandate does not hinder the growth of this important field within the five boroughs. We have raised the small business exemption from $1 million in revenue to $5 million, so that we target only the largest businesses among us.

We have adjusted the bill so that it does not dramatically alter the current pay structure for tipped employees. We have disconnected the bill from the existing “living wage ordinance,” so that we do not create overlapping layers of regulation.

Finally, and perhaps most significantly, we have raised the subsidy threshold of what would be covered under this legislation from the original $100,000 to $1 million. By raising the subsidy threshold to this level, we have insured that the targets of this bill would be large new developments, not the mom and pop shops who are already struggling to keep their heads above water.

We greatly appreciate the feedback and points raised by the small business community. In particular, the Five Borough Chambers of Commerce issued a letter raising valid nuances and implementation issues. However, these points are better addressed as regulations under the bill once it is law.

In short, we have made a good faith effort to address the concerns raised by opponents of the “Fair Wages for New Yorkers” Act at the previous hearing. And yet, we still hear misguided and inaccurate criticisms from many of those opposed to this legislation that the bill is too harsh, and that it will harm the City’s economy.

To support these claims, opponents of this bill hold up a critically flawed study put forward by the City’s Economic Development Corporation. As we predicted more than a year ago, the final study released last month is scientifically defective. At its core, the study focuses on the ICAP subsidy, which would not be covered by this bill. The study was also conducted by a consulting firm, Charles River Associates, that not only has a history of opposition to “living wage” mandates, but the minimum wage law as well.

What we see here is circular logic at its finest. The mayor opposes a “living wage,” and then hires a firm to produce a study that mirrors his beliefs. Therefore, the report’s conclusions are hardly objective or unbiased research. In fact, given the significant changes that this bill has seen in recent months, this study has no relevance whatsoever to the “Fair Wages for New Yorkers” Act, and represents little more than $1 million in wasted taxpayer money.

Reputable economic experts have dismissed this study, and with good reason. James Parrott, chief economist at the Fiscal Policy Institute, has stated that the study “is so fraught with dubious assumptions it should be nominated for a science fiction award.”

In addition to noting that the study covers a subsidy that would not be covered by this legislation, these economists have pointed to a number of fatal flaws in the report. The study completely ignores that New York City is already requiring a “living wage” on all projects under the 421-a subsidy program. It also fails to note that the City has required a “living wage” at specific developments, such as those at Willets Point, Coney Island and the former Domino Sugar factory in Williamsburg. The report also fails to appropriately analyze similar “living wage” provisions in other cities, such as Los Angeles, that have had similar laws for years.

Los Angeles County passed its living wage law in 1999, and many of that law’s opponents made the same arguments that we hear in opposition to our bill.  Specifically, they said that developers would not build because they feared the living wage law would make it impossible to find tenants.  Time and time again, this has been proven false in Los Angeles. Most recently, that city saw fierce competition for the multimillion-dollar food concessions business at Los Angeles International Airport, competition that the living wage law did nothing to prevent.

It should be noted that when the law was debated, then Mayor Richard Riordan opposed requiring airport contractors to pay a living wage, claiming businesses would not want to bid on contracts at LAX if the City Council passed a law requiring them to pay all their workers well above minimum wage.  Mayor Riordan was wrong then, and Mayor Bloomberg is wrong now.

In fact, our good friends at the Related Companies continue to build and develop in Los Angeles.  Most of the Grand Avenue Park’s development project’s funding comes from $50 million in pre-paid rent for ground leases from The Related Cos.

As I stated before, The Related Cos. is a large reason we are here today.  Would they have committed $50 million in pre-paid rent if they believed the Los Angeles Living Wage law would prevent them from finding tenants? Would they have made that commitment if the law prevented access to financing for projects?

The answer is clearly no. Given these considerable issues and the record of success similar laws have seen in other cities, it would be intellectually dishonest for the mayor or anyone else to use this study to rebut the “Fair Wages for New Yorkers” Act.

What do we already know about subsidized development in our City? Look at the Gateway Center Mall in the Bronx, just a few blocks from my office, for a clear view of just how these projects really work.

As reported in the Daily News in June, this heavily subsidized retail mall sees $27 million each year in rental payments from its tenants, yet the developer—the Related Cos.—pays less than $1 million total in rent and taxes for the space to our City. At the same time, the mall has created only 986 full-time jobs—a far cry from the 2,300 originally promised—and most of these jobs pay at or near the minimum wage. Had the Living Wage law been enacted before this project was built, this project would still have been a huge financial windfall to both developers and tenants alike.  In fact, the BJ’s Wholesale Club location at that mall is the third most successful store within that chain in the United States.

Numbers like these show just how subsidized retail development has not worked for the Bronx or the City.  However, we can point to numbers—real numbers—showing that New Yorkers of all stripes support our legislation.

In May, a poll by Baruch College Survey Research was released, showing that New Yorkers are in overwhelming agreement that the City needs a new ‘living wage” law. According to that poll, 78 percent of New Yorkers agree with requiring employers that get taxpayer-funded city subsidies to pay $10-an-hour plus benefits, while just 15 percent do not. This includes 83 percent of Democrats, 74 percent of independents, and 56 percent of Republicans.

What we have seen in recent months, on all sides of the political spectrum, is a total refusal by our citizenry to accept business as usual when it comes to providing heavy taxpayer subsidies to private developers. The “Fair Wages for New Yorkers” Act is a popular piece of legislation, and this poll illustrates that point perfectly.

We have heard the calls of our opposition, and we have answered them. We have analyzed the City’s report on this legislation, and we have found it critically flawed and lacking in scientific merit. The evidence, and the public, are on our side.