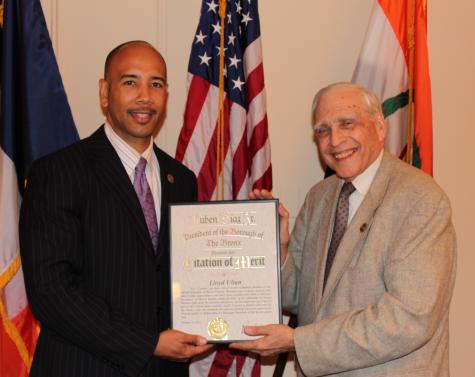 Lloyd Ultan, who was inaugurated Bronx Borough Historian on October 26, 1996, is marking the 15th anniversary of entering this government office in his typical manner—by working.

Ultan is in the midst of publishing his latest book, “Blacks in the Colonial Bronx,” his tenth overall and the third since his appointment. He also writes over 50 articles a year for newspaper, magazines, journals and internet sites. In addition, he answers inquiries by letter or telephone, gives talks and lectures at schools, senior citizen centers, civic groups and public libraries, conducts bus and walking tours, and guests on radio and television talk shows and on television and film documentaries, all covering some aspect of the rich heritage of New York City’s only mainland borough.

Ultan is also mandated by state law to make recommendations for the preservation of Bronx government records and to urge private businesses, organizations and institutions to preserve their records so that they could be sues as source material in writing the borough’s history.

Ultan is the longest-serving of the five borough historians in New York City. The borough historians are appointed by their respective borough presidents and serve at his or her pleasure. Ultan was initially appointed by Fernando Ferrer, reappointed by Adolfo Carrion, Jr., and reappointed again by Ruben Diaz Jr. Many consider him to be the expert in the field of Bronx history. For this, he was named a Centennial Historian of New York in 1998, one of the many honors he has received over the years.

Lloyd Ultan was born in The Bronx in 1938 and still resides there. He was educated in local schools, graduating from Hunter College in The Bronx (now the campus of Lehman College) and from Columbian University. Since 1964, he has thought history at Fairleigh Dickinson University in New Jersey, and since 2004, has also taught a history of The Bronx at Lehman College. From 1971 to 1976, he served as president of The Bronx County Historical Society, helping to mold it into the most active local historical society in New York State. He still serves on its Board of Trustees.

Ultan also established the yearly borough-wide Bronx Week celebration in 1971, served on the Bronx and city-wide commissions celebrating the nation’s bicentennial in 1976, took an active role in preserving the Edgar Allan Poe Cottage in The Bronx, helped create the Bronx County Archives, and served on the Bronx Landmarks Task Force.

Looking back on his 15 years of government service, Ultan notes that his greatest pleasure comes from the expressions of wonder and amazement on people’s faces when he tells them of some of the great things that happened in The Bronx that they did not know before.

“If I can spread the word about the astonishing heritage shared by all Bronxites and the important contributions the borough and its people made to the growth and development of the country and the world, and thus increase their respect for the Bronx and its residents, I am heartily satisfied,” said Ultan.

“For 15 years, Lloyd Ultan has served the Bronx and the rest of the world with his ultimate knowledge of our borough by serving as our historian, as a lecturer, author and by appearing as a guest on radio and television talk shows. He provides us with the rich history of our borough so that Bronxites can be proud of where they are from. It is no wonder why he was appointed three times in the last 15 years to serve as the Bronx historian. Lloyd Ultan, born and educated in the Bronx, is a true Bronxite and the perfect person to serve as our official historian,” said Bronx Borough President Ruben Diaz.