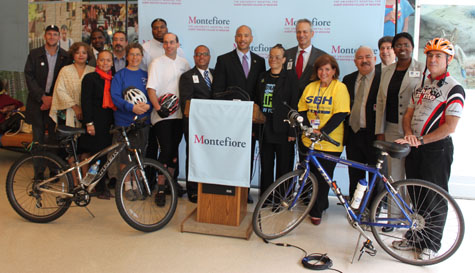 “The Tour de Bronx is a wonderful event, and I was thrilled to join my fellow Bronxites and thousands of out-of-town visitors last year to ride and see all the Bronx has to offer in a new way,” said Bronx Borough President Ruben Diaz Jr. “Riding a bike around our borough is the healthiest way to see the best of the Bronx, and I invite everyone to join me again this year to tour our wonderful borough.”

Borough President Diaz officially launched the event today at The Children’s Hospital at Montefiore, where he was joined by Roxanne Watson, a recent heart transplant patient at Montefiore Medical Center who is now embarking on workouts that include walking and bicycling.

“Attitude, attitude, attitude, that’s the only way I was able to survive,” says Roxanne Watson, a patient who received a life-saving heart transplant at Montefiore Medical Center last year and now supports the hospital’s efforts to communicate the importance of a healthy lifestyle. “For a long time I couldn’t even walk. Now I’m exercising three times a week and willing to try new things like Tour de Bronx,” said Roxanne Watson.

“The Tour de Bronx is a perfect way to promote health and wellness and to discover all that the Bronx has to offer,” said Steven M. Safyer, MD, President and CEO of Montefiore Medical Center. “This annual event demonstrates Montefiore’s commitment to partner with other organizations in the Bronx to strengthen our communities and enhance well-being.”

“The Tour de Bronx shows that bicycling is truly a five-borough phenomenon,” said Paul Steely White, Executive Director of Transportation Alternatives. “This fun, family-friendly event brings riders through the historic and vibrant neighborhoods of the Bronx, giving New Yorkers a chance to experience the borough from the unique vantage of a bicycle.”

“Visitors who ride in Tour de Bronx always want to come back and experience more of our borough,” said Doris Quinones, Executive Director of the Bronx Tourism Council, the organization which produces Tour de Bronx for Borough President Diaz. “The most powerful marketing for the Bronx is to have visitors see its great people and places for themselves.”

Participants can register for the event at tourdebronx.org.