Thousands of free single-ride MetroCards distributed as part of the “You the Man” campaign highlighting safe, responsible planning to curb drunk driving in New York City 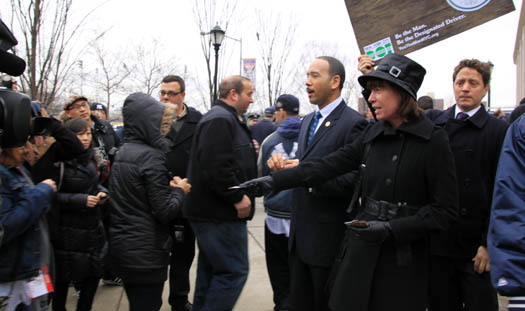 New York City Department of Transportation (DOT) Commissioner Janette Sadik-Khan and Bronx Borough President Ruben Diaz Jr. today announced the give away of thousands of free single-ride MetroCards at locations around New York City, including Yankee Stadium on the team’s opening day, as part of the You the Man campaign designed to curb drunken driving.

The MetroCard promotion builds on DOT’s ongoing efforts to encourage New Yorkers to include a designated driver when plans involve drinking and to remember that the city’s many bus and subway operators and taxi and livery cab drivers also can step in as designated drivers for a safe, reliable ride home. The giveaway at the stadium is tied to a new wave of sports-themed You the Man advertisements timed to the final days of college basketball’s March Madness and the start of Major League Baseball’s season. It also mirrors the City’s sustained push to reduce traffic crashes and make New York’s streets even safer, and follows four years of record-breaking lows for traffic fatalities in New York City history.

Commissioner Sadik-Khan and Borough President Diaz were joined by a You the Man “street team” at E. 161st Street and River Avenue to distribute nearly 1,000 MetroCards to baseball fans and passersby. For a list of upcoming giveaways for safe rides home using mass transit, and other resources for planning a safe time out, visit YouTheManNYC.org.

“Just like in baseball, when it comes to having a good time, it’s all about making it home safe,” said Commissioner Sadik-Khan. “Designated drivers are the MVPs of good times year round, and this city is fortunate to have such a deep bench of bus and subway operators and taxi and livery drivers that New Yorkers can rely upon for safe rides home wherever the party takes them.”

"In a city with so many readily available mass transit options, no one has any excuse to get behind the wheel of a car when they have been drinking,” said Bronx Borough President Ruben Diaz Jr. “I am proud to support the Department of Transportation’s ‘You the Man’ campaign, and I encourage everyone to get a designated driver if they are going to drink alcohol, be it a friend or our buses and subways.”

As part of this safe-ride home promotion, which began on March 24, approximately 3,000 MetroCards—each valued at $2.50—will be distributed. Funding is provided by revenue generated by DWI fines. You the Man street teams have already visited Jackson Heights and Astoria, Queens; Williamsburg and Bay Ridge, Brooklyn; and the Upper East Side in Manhattan; distributing more than 1,000 MetroCards. These street teams are scheduled to be in Manhattan for additional giveaways on April 2 and 4. Visit the You the Man Web site at YouTheManNYC.org for exact locations.

Launched in February 2010, DOT’s You the Man social-marketing campaign targets men ages 21-39, who statistics show are most likely to get into a DWI-related crash or accept a ride from an intoxicated driver. This public education campaign relies on peer-to-peer language to celebrate designated drivers and its latest iteration uses humorous sports-related scenarios to drive the important safety message home that designated drivers are vital to both a fun and safe time out. Sports-themed ads will run now through the summer as well as outdoors on phone booths, on bar posters and on subways. The campaign features a Web site, a href=”http://YouTheMannyc.org/”>YouTheManNYC.org, and a free iPhone app, which uses GPS to help users find the closest subway stops and livery car services.

For more information about the campaign, visit YouTheManNYC.org. For details about DOT’s ongoing efforts to enhance safety, visit www.nyc.gov/dot.

Examples of You the Man’s Latest Campaign Visuals: