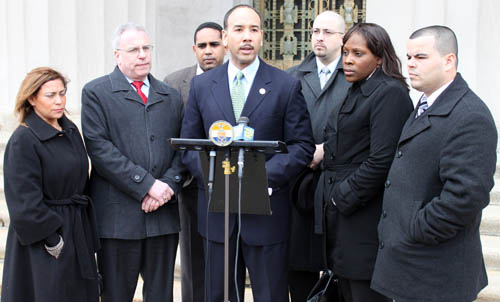 On the steps of the Bronx County Courthouse, Bronx Borough President Ruben Diaz Jr. joined with elected officials from across the Bronx to call for fair negotiations between the Bronx Realty Advisory Board and Local 32BJ, the union that represents over 3,000 Bronx apartment building workers at over 1,000 residential buildings in the Bronx.

Barring successful contract negotiations, the union will be forced to strike when their contract expires on March 14. This strike would have a direct affect on nearly 250,000 residents living in the aforementioned apartment, condos and co-op buildings in the Bronx.

In his remarks, Borough President Diaz called for fair negotiations between BRAB and Local 32BJ in an effort to move the negotiations forward and avert a devastating strike.

“This contract process must move forward. The 250,000 Bronx residents that live in buildings that would be affected by this possible strike do not deserve to see the care and maintenance of their buildings suffer. It is time for all parties to come to the table and hammer out a fair and just contract that keeps people working while maintaining the high levels of service Bronx tenants have come to expect,” said Bronx Borough President Ruben Diaz Jr.

“No one should have to struggle to earn a living wage. The men and women of 32BJ face the same struggle the labor movement faces in Wisconsin and elsewhere, where the economic downturn is an excuse to take hard fought gains away from them. These gains made America into a truly middle-class country, where working people could earn a decent wage. Management must agree to a fair and just settlement to provide a decent life for workers and their families,” said Rep. Eliot Engel.

“During tough economic times, folks are getting hit from all sides. We are already bracing for tough budget cuts – we cannot let workers’ benefits be rolled back or chip away at their hard-earned pensions. The Bronx Realty Advisory Board needs to come to the table for fair negotiations with 32BJ, because the Bronx depends on the building staff that 32BJ represents,” said State Senator Gustavo Rivera.

"The 32BJ members are the people that work in our buildings as superintendents, porters, and doormen, who keep our buildings safe and in good repair.  They are being asked to take what amounts to a pay cut by BRAB, which is demanding huge givebacks and has offered no wage increase.  These hard-working people, many of whom live in our community, have families to support and yet are being asked to reduce their standard of living at the worst possible time.  This is outrageous. They have a right to decent wages and benefits," said Assemblyman Jeffrey Dinowitz.

"I am strongly advocating for the tenants that reside in the Bronx buildings that employ 32BJ members.  I urge the Bronx Realty Advisory Board and Local 32BJ to approach this contract with an open mind and negotiate with fairness.  Any interruption or work stoppage will have a devastating impact on the 240,000 families that reside in these buildings," said Assemblyman Nelson L. Castro.

“The three thousand hard working people represented by Local 32BJ are part of the very heart and soul of the Bronx. The economic well-being of the Bronx depends upon an equitable settlement of the ongoing contract talks that respects the rights of working people and doesn’t set back the clock by undermining the gains of recent years. It is time for management to agree to a fair settlement that doesn’t erode the hard won standard of living for thousands of working people and their families throughout the Bronx,” said Assemblywoman Vanessa Gibson.

"Let’s not allow the tactics used in Wisconsin to be used here in the Bronx. The union is the backbone of our country and we cannot allow it to be broken. I call upon the Bronx Realty Advisory Board to come to the negotiation table immediately and do the right thing for 32BJ members before the contract expires. These members have paid their dues and served this city well. It would be a crime committed to not negotiate a fair and reasonable contract. The members of 32BJ have earned a right to decent wages and benefits," said Assemblyman Eric Stevenson.

“The building workers of 32BJ deserve a fair contract. A strike would be devastating to Bronx tenants in every corner of our borough, and is something we cannot afford. It is time for all parties to come together and agree to an honest, equitable contract that keeps these workers employed and preserves the quality of life of our tenants,” said Assemblyman Marcos Crespo.

“These workers are an important part of a strong community, and I support their demands for a fair contract. It is time for all parties to come to the table and put forward an agreement that ensures these hard working men and women get the contract they deserve,” said Council Member G. Oliver Koppell.

Despite round-the-clock negotiations between the Bronx Realty Advisory Board and 32BJ, little progress has been made towards reaching an agreement. The two sides will resume negotiations Monday morning.  Building workers could go on strike as early as Tuesday, March 15, if an agreement is not reached by the contract expiration at 12:01 AM Tuesday.

The contract under negotiation that covers 3,000 doormen, superintendents, resident managers, porters, handymen and concierges in Bronx buildings expires at 12:01 a.m., March 15. In the event of a strike, more than a quarter of a million Bronxites living in apartments, co-ops and condominiums in every corner of the borough would be directly affected.