Bronx Borough President Ruben Diaz Jr. announced the formation of a Kingsbridge Armory Task Force during his first State of the Borough Address, which took place today at the Evander Childs High School Campus. The new task force, co-chaired by City Council Member Fernando Cabrera, will examine the armory and discuss ideas for its future use, such as manufacturing, recreation, and other innovative uses. 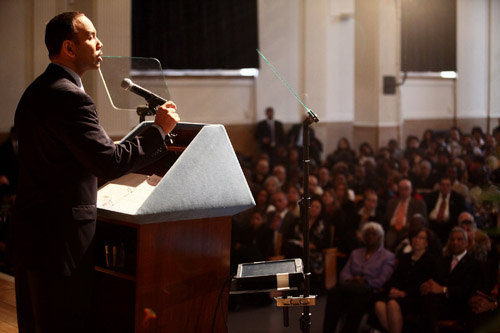 Borough President Diaz also discussed the need for new “living wage” laws in New York City, and announced that he has partnered on legislation with Bronx City Council Members Annabel Palma and G. Oliver Koppell that would require developers that receive taxpayer subsidies to make their project work to pay a “living wage.”

“The idea that any job is better than no job should no longer apply specifically when developers take millions of dollars in taxpayer funding,” said Borough President Diaz. “When New Yorkers are already struggling to pay their rents, when they must worry about feeding and clothing their children, when our poverty rates are the highest in the nation, we cannot accept that the minimum wage is the best salary a developer can offer while they take so heavily from the taxpayers’ wallets. If you want charity, you must be charitable. If you want a public benefit, your project must benefit the public.”
Borough President Diaz reiterated his commitment to bring a real hotel to the Bronx, an amenity that the Bronx has lacked for too long, and announced that he would be working with developers and the New York Hotel Trade Council to identify appropriate sites for a new hotel and generate interest from hotel operators in the Bronx.

“We are all tired of visitors coming to the Bronx but spending their evenings in Westchester or New Jersey, taking with them the money that could have been spent in our restaurants and shops,” said Borough President Diaz. “Together, we will bring this much needed, and long overdue, project to our borough. We have a great deal to offer here in the Bronx, and hotel operators would be crazy to ignore us.”

Borough President Diaz discussed his push to develop a “green” economy in the Bronx, highlighting the recent announcement of a federal grant for the Consortium for Workers Education that will be used to train more than 400 Bronx residents for work in the growing field of energy efficiency. In addition, the borough president’s office is working in conjunction with Senator Kirsten Gillibrand and Fordham University to bring a co-generation plant to the college’s Rose Hill campus. The project will lessen the burden on our electric grid, reduce pollution, and create dozens of new jobs.

“You should know by now that I am serious about building the ‘green’ economy, and these are just a few of the steps that we have already taken. My office will continue to work to expand green manufacturing opportunities in our industrial zones,” he said. “We will encourage existing businesses to retrofit, and work to find incentives for them to do so. We can, and we will, create the blueprint—or should I say ‘greenprint’—to expand this emerging industry and lead the nation.”

Borough President Diaz also spoke on the menace of illegal guns, and discussed the need for stronger national gun control laws, indicating that outside interests can’t drive the debate, “while our mothers, grandmothers and daughters are gunned down right before our eyes.”  Diaz Jr. noted the success of his recent gun buyback program, co-hosted with the District Attorney Robert Johnson and the NYPD at four churches across the Bronx, which was able to take nearly 1,200 guns off of our streets.

“Using this program as a model, my office will look to take an additional 1,500 illegal firearms out of circulation in the next year, and will continue to identify different initiatives and funding streams to combat gun violence in our streets,” Borough President Diaz said.

“I am always happy when affordable housing is developed in the Bronx, but we must do more to ensure that new developments are built that offer Bronxites a chance to buy their homes.

Homeownership leads to community stability, and my office will do all that it can to persuade developers to create more of those opportunities. A stable neighborhood is a better neighborhood, and more stability means a better Bronx.”

Borough President Diaz concluded his speech recognizing the “great deal of work to do” during his administration, and made a called to work together as “One Bronx,” to tackle the issues the Bronx faces head on.

“I know that, as ‘One Bronx,’ we have the will to stand up and fight for our neighborhoods, to ensure that we no longer receive the short end of the stick when it comes to economic development, education, and the critical funding our communities need to thrive,” said Borough President Diaz.