Testimony of Bronx Borough President Ruben Diaz Jr. to the Board of the Metropolitan Transportation Authority on Proposed Service Reductions 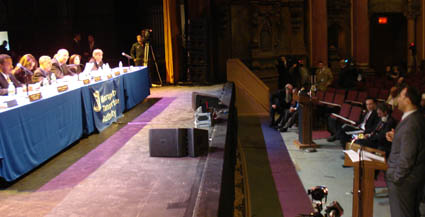 The Borough President gives his testimony to the MTA Board in front of hundreds of Bronx residents.

Good Afternoon. Although it is unfortunate that we do not have the benefit of the full board present at these hearings, I thank you for the opportunity to be heard on an issue that is critical to the residents of the Bronx.

At a time when serious economic challenges face our city and region, the MTA has proposed service cuts that would impose daily hardships on transit users. The MTA has advised that falling revenues and a big budget gap leave no alternative to the proposed service cuts. While it is clear that the MTA has to make difficult choices to balance its budget, it is also clear that the proposed restructuring of the bus routes will result in poorer service, longer waiting time and more transfers.

Bronx residents face the prospect of big changes on eight bus routes and the discontinuation of the Barreto Point Pool shuttle. Residents of outlying neighborhoods with the most need for service would find themselves even more isolated as a result. These service cuts outweigh any economic benefit received from the proposed changes. In some of these cases, the rerouting and restructuring that would have to take place to accommodate riders whose routes have been eliminated cast doubt upon the claim that the MTA would save money through the service cuts.

The Bx18 bus will be completely eliminated, a cut that will leave thousands of residents of Highbridge, Morris Heights and the West Bronx, where River Park Towers are located, without an alternative transportation service. The Bx14 bus, for example, which starts at Hugh Grant Circle in Parkchester and goes into Country Club and carries 2,000 riders on average, is going to be discontinued while other buses are adjusted to accommodate riders of the Bx14. The other routes (Bx 8 and Bx5) will have longer rides, and the Bx5 bus, which is one of the most heavily used routes in the eastern Bronx, is going to be rerouted and will take away service along the Bruckner between Tremont and Pelham Bay Park.   It seems like a lot of planning went into ensuring that the riders of the Bx14 could get to where they are going.  Why don’t we just keep the Bx14 and allow the other routes to conduct the business at hand, which is to get our residents to the places they need to go on time?

For a city that claims to operate 24/7, cutting night time service will harm our restaurant industry and our retail markets.

We are also very concerned about changes to Access-A-Ride and their potential to strand a significant number of riders. NYC Transit proposes three major initiatives in this area:  replacing door to door service with feeder service to fixed route transit, determining eligibility for service for some customers on a trip by trip basis, and relying more heavily on vouchers that allow clients to use taxicabs and car services.  At the very least, these changes will increase the anxiety and insecurity that exists with Access-A-Ride service, which is already greater than it should be, and we find it hard to see how at least some riders subject to these new initiatives would not fall through the cracks and in fact become stranded.

As another cost cutting measure, the MTA has proposed charging students half-price fares this year and full fares starting in 2011.  I want to be very clear in stating that I vehemently oppose such a measure. This action would negatively impact over 550,000 students who currently receive discounted bus and subway passes. Our students need additional support and resources – not less. We cannot balance any budget on the backs of our children. As elected officials and city leaders we must do all we can, not only to preserve funding for our students but to increase funding and support for them.

Over the past few months I have heard the many voices throughout the city that are opposed to this action. I have heard from parents struggling to make ends meet that would not be able to afford to send their children to school if this cut where put into effect. I have heard from students whose school choice options would be eliminated if they did not have the ability to travel to a school of their choosing. This is the reality faced by many and we must do all we can to avoid such a hardship falling upon our students and families.

The idea of our children paying for the MTA’s budget issues is outrageous. That more than a half-million students will be forced to pay full fares for transit is just ridiculous, and we cannot tolerate such a proposal as the only way to fix the MTA’s financial problems. The MTA has to find a better way to close its budget holes without punishing our students with the elimination of this vital program and with more service cuts.

The transit system provides essential transportation, economic and environmental benefits to the region and must not be allowed to slide into decline. Accepting the proposed service cuts, totally at the expense of the riding public, or simply making short-term fixes to the existing system are not responsible options.

While efficiency and productivity are the goals of all services and businesses, they should not come at the cost of affecting the quality of service. The reductions that are proposed are not a function of the cost of running the service but will most certainly harm an already crippling economy.

There has been a lot of investment in the borough of the Bronx, and people are ready to respond to the call for educational advancement and work opportunities. Transportation, however, is still the lifeline to all their hopes and dreams. We need to keep improving it – not make it slower and shorter.