Today, Bronx Borough President Ruben Diaz Jr. released statistics highlighting the decrease in murders in the Bronx in 2012. Last year, the Bronx had a total of 112 murders, down from 148 in 2011 and an all time low in the borough since the early 1960’s.

“We are fed up with the negative stereotypes and the erroneous images about who we are as a Borough. The Bronx is a different place from when I was a teenager in the 80’s and 90’s, and hopefully we can make 2013 safer. This is a good first step, but we have much more work ahead of us,” said Bronx Borough President Ruben Diaz Jr.

Borough President Diaz added, “I would especially like to thank the hard work of the NYPD, our elected officials, community organizations and everyone who continues to help make our borough a safer place to live.” 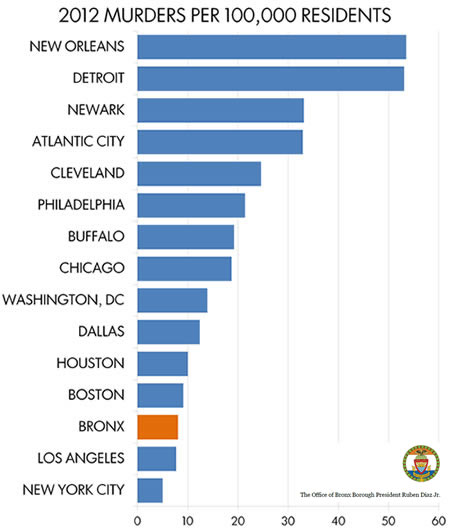 Other cities with significantly higher murder rates than the Bronx included New Orleans, Detroit, Atlantic City, Cleveland, Buffalo, Chicago, Washington, D.C., Dallas and Houston. Los Angeles, with a murder rate of 7.7 per 100,000 residents, barely edged out the Bronx in 2012.

“The Bronx is outpacing the nation in a wide variety of areas, including crime reduction. These statistics show that our borough, which continues to suffer from an inaccurate image as a dangerous place, is indeed outpacing some of the nation’s biggest cities when it comes to violent crime reduction. Given these numbers, it’s time for people across the nation and the world to reconsider how they think about the Bronx,” said Borough President Diaz.

Since the NYPD began tracking crime statistics through CompStat 19 years ago, the Bronx has seen a 70.4 percent total drop in crime, including a 78.1 percent drop in murders. This year’s drop is the lowest number of total murders since 1963. In 2012, the borough saw a drop in shooting victims of 7.7 percent and in shooting incidents of 6.7 percent from the previous year. In the past 19 years, the Bronx has seen shooting victims drop 65.1 percent, and shooting incidents drop 68.5 percent.