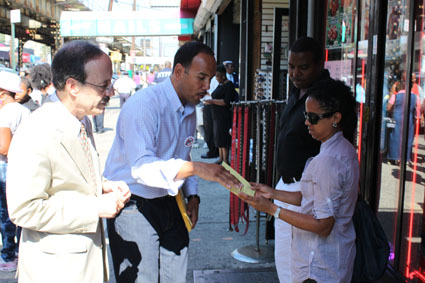 Bronx Borough President Ruben Diaz Jr., together with members of the Bronx Clergy Task Force, New Yorkers Against Gun Violence as well as elected officials and local community leaders, today launched the “Peace in Our Streets” initiative. This new program will bring Borough President Diaz, religious leaders, law enforcement officials and other concerned citizens into direct contact with Bronx residents to discuss growing concerns about violence in their neighborhoods, especially the threat of illegal guns.

The initiative kicked off at the Greater Faith Temple on 4214 White Plains Road in the neighborhood of Wakefield, where Borough President Diaz joined with dozens of clergy leaders and other volunteers to distribute literature on gun violence and other issues while speaking directly with neighborhood residents about fixing problems in their communities.

“I am proud to join with dozens of clergy members and community leaders for the launch of the ‘Peace in Our Streets’ initiative. Gun violence is a scourge on our communities, and Bronxites have made it clear to me that they will not sit by and allow the actions of a few thugs to ruin the good work we have done rebuilding the Bronx. I encourage everyone to join us and become part of the solution to illegal guns and fight the violence in our neighborhoods. Bronx residents are ready to take the fight against illegal guns to the streets, and through this initiative we will do just that,” said Bronx Borough President Ruben Diaz Jr.

“The D.A.’s Office will continue to prosecute and incarcerate those who possess illegal guns:  ultimately, however, it’s going to take an all-out effort by every segment of our community to educate about the dangers in order to bring about a change in the culture. As a community, we must say ‘We won’t tolerate illegal guns,’” said District Attorney Robert T. Johnson.

“The Bronx is a vibrant community that is bringing itself out of our economic downturn. It is always a joy to walk the streets, meeting the residents of our borough. It is a double pleasure to walk with Borough President Ruben Diaz. When I bring federal money to the Bronx, I know that working with him it will be used wisely and well. Together as a team, we can help the people of the Bronx as they bring our borough back to its rightful status,” said Congressman Eliot Engel.

“As religious leaders we have the responsibility to participate in the fight against crime.  I am proud of partnering with Borough President Diaz, elected officials and Bronx residents to launch an initiative that could become a powerful tool in the battle against those who believe that violence is the answer.  We all want and need peace in our streets, and we are ready to make that peace turn into a reality,” said Bishop Angelo Rosario, Chair of The Bronx Clergy Task Force.

“I am so excited about the ‘Peace in Our Streets’ movement that is coming to Greater Faith Temple. This synergy of resources is combining with one language, and one goal, to end the violence.  Let us religious leaders pledge our cooperation and support as liaisons to law enforcement. Obviously we are in front of hundreds and thousands of parishioners every Sunday or Sabbath, and we do have a strong influence.  Let’s work together to purge our streets of the violence.  After all, we are on the same team.  Our youth are yet worth saving.  I believe with unity, and the power of agreement our city will change because God sent us,” said Pastor Michel White-Haynes of the Greater Faith Temple Church.

“The ‘Peace in Our Streets’ initiative shows our community how we can be a part of the solution to gun violence. Borough President Diaz has taken a major step forward in launching this initiative, and I am proud to stand with him, the Bronx Clergy Task Force and dozens of community members to continue to the fight against illegal guns in our streets,” said Gloria Cruz, Bronx Chapter Leader for New Yorkers Against Gun Violence.

“I am thankful that Borough President Diaz has launched the ‘Peace in Our Streets’ initiative, and I am proud to walk the streets with him today to let the community know that there are solutions to the problems that face us. There can be no tolerance for illegal guns, and that message could not be made clearer than through this much-needed initiative,” said Assembly Member Carl Heastie.

“Just about a year ago, Sadie Mitchell, a wonderful woman 92 years of age, was gunned down in Community Board #12 as she sat in the living room of her own home.  At that time, Borough President Diaz promised that he would strive to rid our neighborhood and our borough of violence, especially that caused by guns.  I am gratified and pleased that he has chosen our district to undertake his “Peace in Our Streets” initiative.  I especially call upon our clergy and our children to join him, as will I, in this noble cause,” said Fr. Richard Gorman, chairman of Community Board #12.

The “Peace in Our Streets” initiative will regularly take to the streets of the Bronx to educate community members about gun violence and ways to prevent illegal guns from infiltrating our streets. The next event will take place on Saturday, October 9, at the Mount Hermon Baptist Church, 1170 Nelson Avenue, in Highbridge at 1 p.m.

The “Peace in Our Streets” initiative is part of an ongoing effort by Borough President Diaz and his office to fight against gun violence in not only the Bronx, but across the City and State, which includes the hosting of a “National Day of Outrage” against gun violence in November 2009, the co-sponsorship of a gun buyback program, together with the NYPD and Bronx District Attorney Robert T. Johnson, that took roughly 1,200 guns off the streets in January 2010; and the ongoing meetings of the borough president’s youth council, which is co-sponsored by New Yorkers Against Gun Violence.

The flyer that was handed out at today’s event, featuring information in both English and Spanish, is attached.