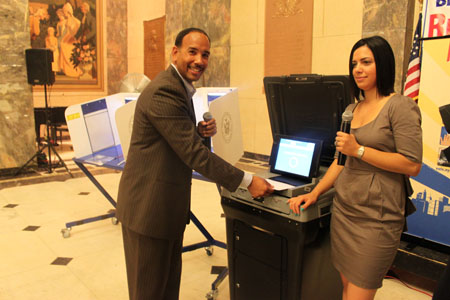 Bronx Borough President Ruben Diaz Jr. during the demonstration with Valerie Vasquez from the NYC Board of Elections.

“Voting is not only our right – it’s also our responsibility. I want to encourage Bronx residents to go to the polls and vote during the upcoming elections,” said Bronx Borough President Ruben Diaz Jr. “The new machines are very effective, fast and easy to use. Voters will simply mark their choices on a paper ballot and insert their marked ballot into a scanner.”

The Board of Elections in the City of New York is performing daily demonstrations of the new voting system in neighborhoods throughout the city to allow voters and the media to see how the new system works, ask questions and to practice voting with a paper ballot. The demonstrations are part of the board’s ongoing, comprehensive public education program to raise awareness among New York City voters that there is a new way to vote that assures all votes will continue to be counted accurately.

This system is being implemented in compliance with the Help America Vote Act, passed in October 2002 by Congress, which requires a voting system that produces a permanent, verifiable paper record. The lever machines previously used in the city did not comply with this requirement. The new voting system will be in place in all poll sites for the Primary Election on Sept. 14, 2010 and the General Election on Nov. 2, 2010.

For further information on the new voting system, please visit NYC Board of Elections.